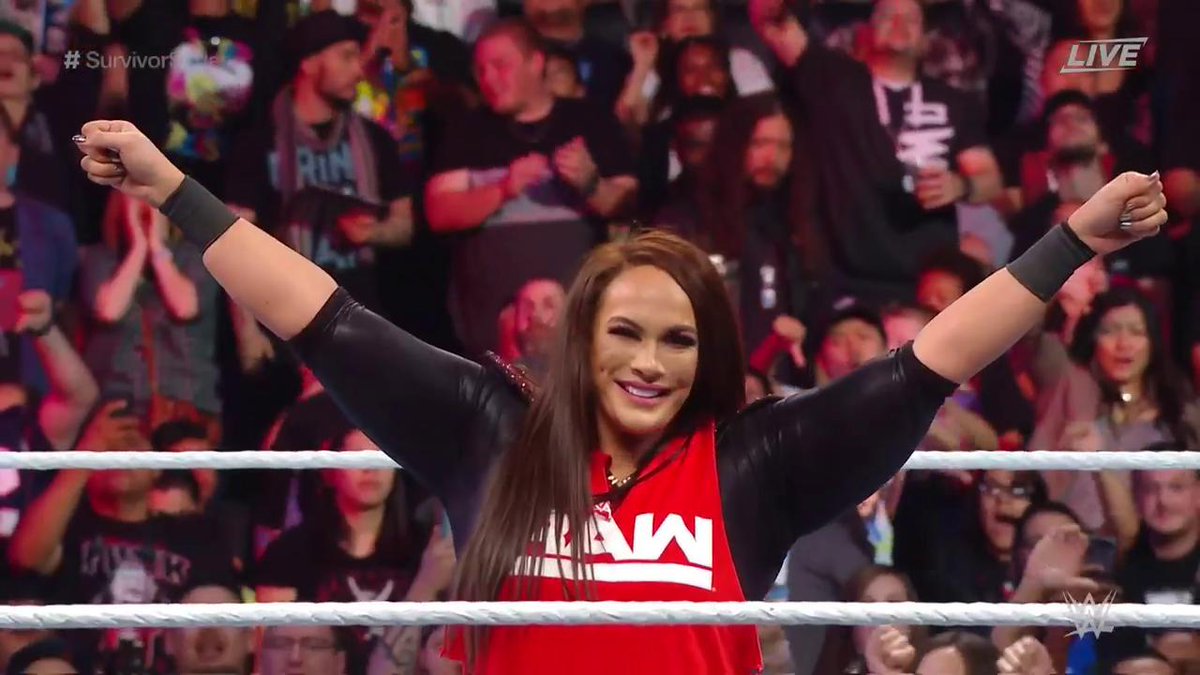 We go to the ring for the women's Team RAW vs. Team SmackDown match as Carmella comes out with R-Truth, rapping their way to the ring. Team SmackDown Captain Naomi is out next. Mandy Rose is out next as JoJo does the introductions. Sonya Deville is out next. Asuka is out last to a big pop. We see a replay from the recent women's invasion angle on RAW. Team RAW is out next as Captain Alexa Bliss comes out. She will not be wrestling tonight. Mickie James is out next, followed by Tamina Snuka. Nia Jax's music hits next as the arena fills with loud boos. Sasha Banks is out next, followed by Bayley to a pop.

The bell rings and the two teams get ready to do battle. Naomi starts off with Snuka. Fans start chanting "Becky" for SmackDown Women's Champion Becky Lynch. Naomi with a quick pin attempt after taking Snuka down. Tamina decks Naomi and knocks Rose off the apron. A big brawl breaks out in the ring with all 10 Superstars. Asuka sends Banks to the floor after a bunch of strikes. Naomi takes Jax down with a kick. Snuka superkicks Naomi and her pins. Naomi has been eliminated to boos.

Carmella comes from behind and immediately rolls Snuka up for the pin. Snuka has been eliminated to a pop.

Carmella calls for a dance break and the music hits as the lights go down. She dances and stops, but turns around to Jax staring at her. This backfires but Rose ends up tagging in. she taunts Jax but Jax levels her for a close 2 count. Rose comes back and drops Jax. Mickie tags in and unloads on Rose. Rose pushes her away and misses a clothesline. Mickie with a neckbreaker for a 2 count. Rose with an abdominal stretch to Mickie now, while driving an elbow to the gut. Mickie breaks it and drops Rose into a submission. Rose makes it to the bottom rope to break the hold. Asuka tags in and stares Mickie down. Fans chant for Asuka as they lock up. They go at it and collide with shoulders in the middle of the ring but both are still standing, twice. Asuka drops Mickie with a Hip Attack.

Asuka with more offense to Mickie. Asuka with a submission into a close 2 count counter by Mickie. Asuka drops Mickie with a backfist. Sonya tags in and rams Mickie into the corner. Sonya with thrusts as the referee backs her off. Deville goes back in but Mickie elbows her. Mickie drops h er again and delivers two kicks. Mickie keeps control but Bayley tags herself in. Bayley and Mickie have a few words. Bayley drops elbows on Deville and covers for a 2 count. Banks tags in and starts working over Deville in the corner. Banks with knees to the gut while Deville was laid out in the corner. Mickie tags herself in and hits a Thesz Press on Sonya for a 2 count. Deville counters and hits a Spear. Deville charges in with a knee but Mandy is legal as she tagged herself in. Rose runs in and steals the pin. Mickie has been eliminated.

Rose and Deville have some words. Bayley tags in and rolls Rose up for a 2 count. Rose turns it around and in comes Carmella. Carmella takes Bayley to the corner and works her over. Bayley drops Carmella in the corner and goes to the top but has to land on her feet. Bayley misses again and Carmella kicks her to her knees. Carmella moonwalks while applying a headlock. Carmella keeps control of Bayley and mocks Banks. Carmella charges in the corner but Bayley catches her with a Bayley-to-Belly suplex. Bayley covers for the pin. Carmella has been eliminated.

Rose runs back in and takes Bayley back down, working her over in the corner. Rose keeps control and mocks Bayley. Banks finally gets the tag. She hits clotheslines and a dropkick to Rose. Banks misses knees in the corner as Rose moves. Banks comes back with the Backstabber into the Banks Statement. Rose taps. Rose has been eliminated.

Deville runs right in and starts pounding on Banks. It's down to Deville and Asuka vs. Banks, Bayley and Jax. Asuka tags in and unloads on Banks in the corner with kicks. Asuka takes Banks to another corner and hits the Hip Attack. Asuka with a kick and a 2 count. Deville tags back in and drops Banks into a bodyscissors. Banks powers up with Deville on her back, ramming her into the corner. Banks tosses Deville to the mat Deville blocks a tag but Banks finally gets it. Bayley comes in with clotheslines to Deville. Bayley with a counter and a running knee to Deville. Bayley with more offense and a high knee in the corner for a 2 count. Bayley dodges moves but Deville rocks her and nails a Spinebuster for a 2 count as Jax runs in and breaks the pin. Fans boo Jax.

Jax runs into the ring post after Deville moves. Pop fans Asuka kicks Jax in the face and they pop again. Banks ends up nailing the Meteora from the apron to Asuka on the floor. Bayley with the big suplex to Deville for a 2 count. Deville ends up taking Bayley to the mat but she also lands hard on her neck on the floor. Deville kicks Bayley into the barrier as the referee counts. They continue brawling. Bayley with a Bayley-to-Belly suplex on the floor. They both get counted out. Bayley and Deville have been eliminated at the same time.

It's down to Asuka vs. Banks and Jax now. Banks faces off with Asuka in the ring. They go at it and trade dropkicks. Asuka blocks the Backstabber and levels Banks. Asuka with a big German suplex, dropping Banks on her neck. Banks catches Asuka with a right hand. Jax joins Banks on the apron and pop fans. Asuka knocks Jax off with a Hip Attack and pop fans. Banks comes in and drops Asuka. Asuka sends Banks out of the ring. Asuka tries to attack from the apron but Banks catches a boot and drops her face-first on the apron. Bliss talks Jax up to get her ready while she recovers on the outside. Asuka with a Hip Attack to Banks on the outside. Asuka brings Banks back in and nails a missile dropkick for another close 2 count. Fans chant for Asuka as she goes at it with Banks now. Banks goes for the Banks Statement but Asuka counters with the Asuka Lock. It's countered. Sasha with a 2 count. Banks blocks a kick and sends Asuka to the corner. Banks with the flying knees into the corner. Banks goes to the top but Jax comes to the apron and pushes her partner off. This allows Asuka to roll Banks into the Asuka Lock. Banks taps to Asuka. Banks have been eliminated.

Fans boo as Jax enters the ring and drops a pair of legs on Asuka while she's down. Jax with a third leg drop. Jax stands tall as the boos continue. Fans are not happy with Jax injuring Lynch. Jax with a Samoan Drop for the easy pin on Asuka and the win.