November 17, 2018 Technology, unitedstates Comments Off on You Can Now Buy Assassin's Creed Wine

Just in time for the holidays, Winemaker Lot18 has released a collection of red and white wines based on various assassins from the Assassin's Creed series. Similar to the winemaker's Lord of the Rings and The Walking Dead collections, this Assassin's Creed wine collection includes a selection of various wines inspired by notable characters from the series such as Bayek (Assassin's Creed Origins, whose wine is somehow not Egyptian), Connor Kenway (Assassin's Creed 3), and Ezio Auditore (Assassin's Creed 2). Each bottle will retail for $ 20 per bottle up to $ 192 for a full case. It's worth noting that the series newest heroes, Kassandra and Alexios, as well as pirate assassin Edward Kenway, are missing from this lineup, which could mean a second run is planned down the road.

For those interested, below is a list of the bottles featured in this collection and they can be ordered here.

While wine is not for everybody, its usually a pretty safe bet as far as Christmas gifts go and who would not want a bottle with everybody's favorite Italian not ninja on the label to add to their collection? It's still not the strangest piece of Assassin's Creed merch you can buy.

If you're not in the mood for a themed bottle of wine but still wanna live the assassin life? Be sure to check out our impressions of the newest installment in the Assassin's Creed series, Assassin's Creed: Odyssey.

What do you think about the Assassin's Creed wine selection? Is it me or is that that Aveline bottle super difficult to say out loud? Red or white wine? Let us know in the comments below!

Have a tip for us? Awesome! Shoot us an email at [email protected] and we'll take a look! 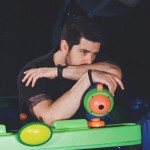 I used to be that band guy with super cool hair who lived and breathed breakdowns, now I work on TV shows as an colorist / editor. You can find me on twitter talking about my ever expanding collection of NES games and my love hate relationship with Tinder.